6 months in and already expectant mum Khloe is being slammed

Of course, critics are already shaming Khloe after she revealed her pregnancy just last week.

Khloe is expecting a little baba of her very own in the next three to four months with basketball player beau, Tristan Thompson.

First off, everyone was only too delighted and over the moon for our favourite Kardashian, especially after the well documented chance that she may never be able to conceive.

Yesterday 33-year-old Khloe took to Twitter lashing back at those who were slamming her for continuing her exercise routine while pregnant.

You don’t hear of many pregnant women escaping other people’s rather large ego’s and opinions, so we do love when mama fires back.

“…my workouts are cleared and highly recommended. Thanks kiddos! Don’t make me stop sharing shit.”

For the ones who think they are physicians all of a sudden ??‍♀️ but MY doctor and I communicate and my workouts are cleared and highly recommended. Thanks kiddos! Don't make me stop sharing shit https://t.co/7raJUgmcBA 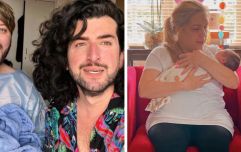 END_OF_DOCUMENT_TOKEN_TO_BE_REPLACED

Khloe who has worked long and hard to achieve her famed ‘revenge body,’ even making a short-lived show out of her fitness success, undoubtedly knows what she’s doing and is surrounded by some of the best doctors money can buy.

But even Khloe can’t escape the scrutiny that comes with being pregnant. However, she certainly had plenty of folks come to her defence and even encourage her. One said;

"As long as you exercised prior there is no reason to stop it’s healthier for you and baby I had patients who continued to run marathons until 7-8th month go for it and only listen to your dr and your body." [sic]

We’re still SO happy for Khloe!! And mamas – stand your ground and just do you. There’s no time for haters.