Well, what else were you supposed to be doing to pass time when everything was closed and forbidden to do...?

It seems many of us opted to pass the time during the lockdown in bed – at least if the predictions by the National Maternity Hospital at Holles Street is to be believed.

According to the Dublin-based maternity hospital, there has been an increase in the number of women contacting them to register pregnancies, with the hospital now predicting a 10 percent rise in births early next year.

Speaking on Newstalk Breakfast yesterday, Mary Brosnan, the director of midwifery and nursing at Holles Street, spoke about what they're expecting early next year.

"If you compare last January to 2021 coming... it looks certainly we will be up 10 percent on that month. But I wouldn't say 10 percent for the full year."

"I don't know if you can entirely say [it's down to COVID]. It's very much an interesting phenomenon... any time there's any big event, people kind of predict nine months later... and think whether that'll be related." 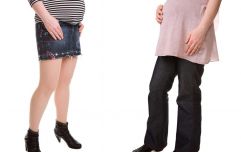 Could your height impact the length of your pregnancy? Science thinks so

END_OF_DOCUMENT_TOKEN_TO_BE_REPLACED

It looks like Brosnan and her colleagues will have little time to relax in the early new year.

"But certainly from March and April [this year]... we will be expecting next January and February to be quite busy."

Tell us – are YOU currently expecting a lockdown baby?


popular
This plant-based cleaning range will make a huge difference to your home hygiene
Madeleine McCann's parents release statement ahead of her 18th birthday
15-year-old boy charged with murder of woman in Dublin
11 beautiful baby names with a slightly bohemian vibe
International travel could return as early as July, according to Simon Coveney
Minister for Justice Helen McEnte shares first picture with newborn son
Watch: A woman who didn't know she was pregnant gives birth at 30,000ft
You may also like
1 day ago
Meet the Irish midwife in Australia who is helping women worldwide access childbirth classes
3 days ago
A viral video has revealed just how much it costs to give birth in the US
5 days ago
Some women apparently feel 'phantom' baby kicks even years after they were pregnant
5 days ago
This picture of what 10 centimetres dilated actually looks like is utterly mind-blowing
1 week ago
Two Irish mums have created a toothpaste specially for pregnant women
1 week ago
Woman handcuffed to bed by police while in labour
Next Page