Vogue Williams took to social media to share an image of her growing bump, celebrating the fact it has finally "popped".

Having announced her pregnancy on social media last month, Vogue showcased her bump today while on holidays in Greece and she looks radiant.

As of late, the star has received many comments about her bump and the size, therefore she wanted to set the record straight that often it is all down to angles and the way she is posing. She explained all in the post saying:

"These photos were taken within half an hour of each other. Front on no bump, side profile POW there he is! So glad my bump has finally popped ? I never alter my body in any pictures, if you can’t see my bump it’s just because of the angle although I may only take side profile shots from now on!" 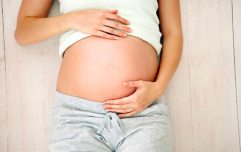 Women should wait one year between giving birth and getting pregnant, says study

END_OF_DOCUMENT_TOKEN_TO_BE_REPLACED

The 32-year-old is over in Greece for a much needed holiday alongside fiancé, former Made in Chelsea star, Spencer Matthews. The star popped the question to the Dublin native in February this year, taking to the stage after a Lion King performance in the West End, London, to ask the all important question.

I can’t stop staring... @spencermatthews you’ve found your calling in life, I want you designing all of my jewellery from now on ?

No date has been confirmed for the wedding yet, but we expect it to be a spectacular affair filled with plenty of celebs. We cannot wait to see the dress she chooses for the day, our imagination are already running wild.


popular
Mini Bella Boutique is running a huge online clearance sale as it sadly closes
David Beckham shared his dinner on social media and we really wish he hadn't
Attention parents and kids! Here are 3 simple but scrumptious recipes to keep you busy all afternoon
Kim Kardashian says lockdown has made her realise she doesn't want more kids
How to potty train your toddler in three days, according to the experts
Due in 2020? These baby girl names are sure to be popular in the coming months
Katy Perry reveals the gender of her first child with Orlando Bloom
You may also like
3 days ago
#Covid-19: Six-week-old baby dies after testing positive for coronavirus
5 days ago
#Covid-19: Life cannot go 'back to normal' after Easter Sunday, says Simon Harris
6 days ago
#Covid-19 cases to rise in Ireland due to focused testing, says HSE
6 days ago
Ronan and Storm Keating have welcomed their second baby – and her name is the cutest
1 week ago
Andrew McGinley asks people to send him letters as he struggles with self-isolation
1 week ago
#Covid19: Department of Educations confirms free meals will resume for school children
Next Page