Caroline Foran: "Pregnant or not, pandemic or not, we should all be more compassionate with ourselves"

“We do underestimate how much we’re able to cope with."

Caroline Foran is expecting her first child, and like many other expectant mums across the country, she has experienced the majority of her pregnancy in the midst of a global pandemic.

This Thursday (July 29), the bestselling author will share her experiences on WaterWipes' second instalment of their #EarlyDaysClub - a virtual event for parents to share the woes and wisdoms of parenting.

Hosted by comedian and mum Ellie Taylor, the event will feature TV panelists Lucy Mecklenburgh and Ore Oduba, as well as GP, Dr Stephanie Ooi, and Caroline herself, who will be chatting all things pregnancy during a pandemic, lockdown parenting nightmares, and everything in between.

Before that though, she caught up with us to chat through her experience as a first time expectant mum, provide some helpful tips for coping, and discuss how she deals with anxiety during pregnancy.

"This is my first time being pregnant, so already it’s beyond my every day experience because I don’t know what it’s supposed to be like," she tells HerFamily.

"There have been some challenges, obviously there’s that added layer of anxiety around the virus and feeling isolated and not having people around. I did miss the support of my friends and my mammy in the early days. I’ve had a very tough pregnancy, I’ve been very sick, so I really was missing the support of my mammy before I became a mammy myself."

Gorgeous mini baby shower today with some besties. Feeling so grateful for my incredibly lucky lot in life 💕💕💕 (wearing @thepodcollection)

With only three weeks to go before her due date, Caroline is spending the majority of her time winding down. "Netflix and chill," she says, "but actual Netflix and chill." 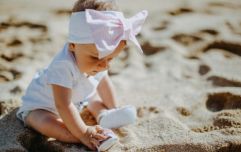 END_OF_DOCUMENT_TOKEN_TO_BE_REPLACED

At the beginning of her pregnancy, Caroline suffered from severe morning sickness. The experience, she says, has been incredibly physically challenging. Couple that with the anxieties she had about being unwell before she became pregnant, and the last eight months have been less than a walk in the park.

“It’s already stressful being pregnant," she says. "But that’s why I’m genuinely delighted to be working with WaterWipes as an ambassador because I’m allowed to be authentic and vulnerable. There’s no perfect way of parenting and this glossy image of the mum-to-be is not something I want to promote."

Despite this, Caroline says that for all the isolation and loneliness that came with lockdown, it also brought a lot of positives - not having FOMO, for one.

"I’m not stuck out with a load of drunk people, I have been forced to slow down" she says.

"My husband has been working from home too so it’s been nice having him here for the days where I don’t feel well. There has actually been more benefits than negatives with the restrictions for me, and now since they’ve lifted I’ve gotten to see my mam for the first time too. She lives in Dingle so I'm so grateful that I've finally gotten to spend time with her."

Caroline's first couple of scans happened pre-pandemic, so husband Barry was able to be there. Since then, she has made sure to film the ultrasounds and show him the videos later on. 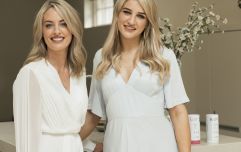 END_OF_DOCUMENT_TOKEN_TO_BE_REPLACED

It's not ideal going for scans alone, says Caroline, but she was adamant that she needed to "get on with it."

"Our main concern is that the baby is healthy," she says. "It would be nice for Barry to be there but there’s nothing to gain from being upset.

“I am a bit nervous about actually giving birth because there are measures still in place. Barry can come in but after the first hour he has to go. Lots of women I’ve spoken to who have had babies are saying that that’s the dream, that I’ll want to be on my own and not want to share the baby, so maybe it won’t be too bad!

"My default is to jump to the worst case scenario but maybe I’ll be surprised. Plus I’ll be surrounded by midwives and they need to teach me how to do everything because I won’t have a clue."

Caroline says that generally, most of her anxiety comes from the fear of the unknown: not knowing if she was going to experience morning sickness, and concerns around whether she would be able to cope or not.

For the most part, she says, she has handled being pregnant during the pandemic very well - an achievement she hopes she will be able to take with her after she gives birth.

"The fear is a lot greater when you’re not actually there yet," she says.

“We do underestimate how much we’re able to cope with, and that’s something I hope I’ll be able to bring forward with me after pregnancy.

"I have so much awarenesses of my anxiety so I was oddly prepared for pregnancy and the pandemic. I allow myself to be afraid and unsure and that’s perfectly fine. Pregnant or not, pandemic or not, we should all be more compassionate with ourselves."


popular
Answer our short survey for a chance to WIN a stay for two at the Dingle Skellig Hotel in Kerry
The super-easy DIY remedy that will smooth and soften your dry, cracked feet
Classic baby names: 10 names that have kept their charm these past 100 years
Rupert Young, twin brother of Will Young, passes away, aged 41
Cameron Diaz opens up about life with baby Raddix – and says motherhood changed her life
These 5 Foods Could Increase Your Chances of Having Twins
The beautiful poem that sums up how all brand new mums are feeling right now
You may also like
6 days ago
Naomi Ann Smith shares honest post on not having the typical pregnancy body
2 weeks ago
Congrats! Nicki Minaj has just announced that she is pregnant with her first child
2 weeks ago
The extension to maternity leave is not idealistic, it is essential
3 weeks ago
Rochelle Humes just shared a hilarious update on her pregnancy and I can relate
4 weeks ago
According to science having curly hair could make your placenta stronger
4 weeks ago
Vogue Williams is obsessed with these maternity jeans – and you'll see why
Next Page