It's a big step for any couple.

Charlotte Crosby has opened up about moving in with her boyfriend, Joshua Ritchie.

The reality star moved in with her other half last month, and took to Instagram today to say that even though she was afraid to move away from friends and family, it was the best step she could have taken.

Sharing a picture of Joshua with her two nanas, Charlotte said: "Josh and the Nanas today. What an amazing weekend I’ve had at home.

"Moving away was actually a really, really scary decision for me, I’m incredibly close to my family and friends. And the thought of them not being around the corner made me so sad.

"I’ve made such a huge commitment to Josh [sic] and he has honestly been so amazing through this all, he’s been there for me in ways I never even realised he could be, he’s been a knight in shining armour looking after me and making sure every step of the way I’m OK.

Cheers to the next chapter ? Celebrating the fact we get the keys to our little home together in 2 days ❤️ I CANT BELIEVE IM GUNNA LIVE WITH A BOY ? My trousers are @peppergirlsclub ? 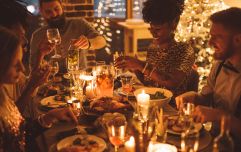 How to cope with 'single-shaming' over Christmas, and why it shouldn't be a thing

END_OF_DOCUMENT_TOKEN_TO_BE_REPLACED

"The truth of the matter is I’m only a short drive away and coming home feels even more special now. This weekend I’ve had family time and friend time and I’ve smashed some of my first MAID OF HONOUR DUTIES. Great success."

Charlotte announced she was moving in with Josh on Instagram. Posting a picture of the pair, she revealed that they were collecting their keys in two days time and even hinted that babies could be on the way.

It's a very exciting time for her!