Two sisters reveal how their sons are brothers, twins and cousins

Jax and Jett were born to two sets of identical twins.

Two identical twin sisters have left their followers in shock after revealing that their individual sons are cousins, brothers, and twins all at once.

Briana and Brittany Sayler are known for starring on TLC's Extreme Sisters - a show about siblings who share close and fairly intense bonds with each other.

The pair married two identical twin brothers and each couple welcomed baby boys within three months of each other - Jax and Jett. And the two baby boys are certainly unique.

Posting a cute photo of Jax and Jett to their shared Instagram page, the twin mums wrote: "Cousins, genetic brothers, and quaternary twins."

In this case, the children, who would typically be considered first cousins, are also technically genetic siblings.

Jax and Jett's DNA is the same as it would be if they were brothers. 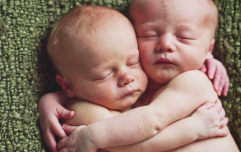 END_OF_DOCUMENT_TOKEN_TO_BE_REPLACED

It all sounds pretty complicated, but one fan in the comments summed it up well:

"Their mothers and fathers are identical twins. Both sets of parents then had kids. Same exact DNA created both. Make sense?"

Another clarified: "Identical twins share the same DNA and both sets of parents are identical. If this family took an ancestry DNA Test it would show these babies as siblings, not cousins!”

Others took to the comments to say how adorable the special little boys are and how they look so alike.

"Amazing how they really do look like twins, even with the age difference," one person said.

"I thought it was the same baby at first!" another wrote.

On Extreme Sisters, Briana and Brittany showed how they both live together with their two partners under one roof and raise their babies - together as one big family.


popular
Midwife tragically dies in front of her children on flight
Caitriona Balfe pens moving tribute after her father's sudden death
Maura Higgins reveals she was sexually assaulted by taxi driver in Ireland
How soon is too soon to leave your new baby for the first time?
Search underway in Ireland for missing 11-year-old Ukrainian girl
Here's where you can get the best deals on all your Back to School essentials
This mum's post about dying to send her kids back to school is too funny
You may also like
5 months ago
This cot hack is so handy if you have two babies using a cot at the same time
5 months ago
"Double blessed": TOWIE star Frankie Essex reveals she's pregnant with twins
8 months ago
My wife wants to give our twin boys matching names and I think it's a terrible idea
10 months ago
Premature twin born 3 times lighter than his brother left fighting for life
11 months ago
Twins conjoined at the head separated after 12-hour surgery
11 months ago
Most junior infants in this Kerry school are twins - five sets to be exact
Next Page