The emotional moment between the family has since gone viral.

Weddings are a Kleenex-sponsored event as it is, but one US groom left his entire wedding attendance list in tears when he made a second proposal at the alter.

Not only did 33-year-old Dontez Williams gain a wife on his August wedding day, he also officially gained two new daughters after proposing to adopt his bride's kids during the ceremony.

After the vow exchange with his wife, 26-year-old Myshella Burton, the groom from Detroit, Michigan, made an emotional speech to her two daughters: Abigail, 9, and Natalie, 8.

Footage of the emotional moment Dontez asked if his stepdaughters wanted to make it official and be adopted by him has now gone viral.

In the video, he says through floods of tears: "No matter how the two of you are feeling, you always show the greatest amount of love to me each and every day.

"...I know that I'm a father figure to you both and y'all call me dad. But I wanted to make it official and ask, can I adopt you?"

The girls immediately begin to cry and throw their arms around him as members of the wedding party can be seen getting emotional in the background.

Dontez met Myshella several years ago on the dating app Plenty of Fish. He has known her daughters since they were one and two. 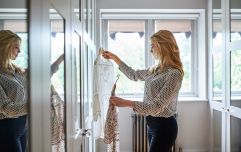 My mum thinks this dress isn't right for wedding- is she right?

END_OF_DOCUMENT_TOKEN_TO_BE_REPLACED

The couple, who have been engaged since 2017 and had to postpone their original 2020 wedding date due to the pandemic, discussed adoption prior to the ceremony.

Yet after getting inspiration from social media clips of stepdads proposing adoption, they decided to leave it a surprise for the girls on the special day.

Speaking about the emotional moment, Dontez told the Daily Mail that he had "transitioned from a stepfather to a father to these girls."

"Although they are not biologically mine, blood could not make us any closer," he said. "I wanted to make it official in becoming their dad as I wrote vows not only to my wife but to my daughters as well asking them could I adopt them.

"When it comes to me being in their life, that is something they are very sensitive about, so their reaction was understandable in how it touched them the way it did."

It took several seconds for the two girls realise what was happening as Dontez went off-script from the wedding rehearsal run-throughs on the big day itself.

"We didn't rehearse it, so I knew why they were confused at first," Dontez continued.

"But when my stepdaughters realised what was happening, they were all in and so tuned into my proposal that I felt like my proposal was something they had been waiting for all their life.

"I want people to understand that showing emotion is healthy, that fathers are needed in a child's life, and that there are good men out there who will step up when the other parent is absent.

"I want people to know how important companionship and respect is, even to children," he finished.


popular
Tom Cruise slated for "inappropriate" behaviour around Kate Middleton
Warning issued to dog owners about the "big stretch"
What exactly is monkeypox and is it dangerous?
Musings: 1 in 7 couples prefer sleeping in separate beds and I agree with them
Expert says Cocomelon acts "as a drug" to kids' brains
Teenager dies after hole he digged on the beach collapses
Viewers believe Bluey is a rainbow baby- check out the theory
You may also like
4 days ago
"Where are your kids?" Kourtney Kardashian hit with backlash over her wedding
5 days ago
Kourtney Kardashian and Travis Barker officially tie the knot
3 weeks ago
Stacey Solomon admits she was self-conscious about not being a "young, virgin bride"
3 weeks ago
Stacey Solomon gives fans a glimpse at her wedding dress
4 weeks ago
8 stunning bridal headpieces for your big day
1 month ago
Brooklyn Beckham and Nicola Peltz signed the "mother of all prenups" - here's why
Next Page